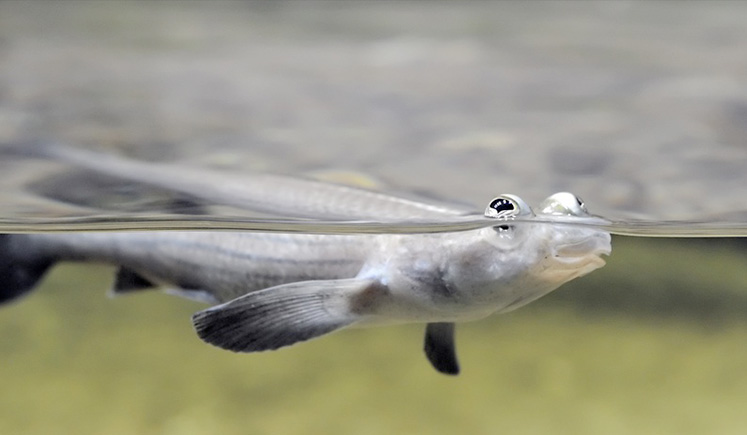 The Four-Eyed Fish is probably one of the most unusually large-sized Livebearer fish with a strange looking eye. Despite how their name is Four-Eyed, they really only have two eyes. And no, they don’t wear glasses either! They got their name because each of their eyes have two pupils and they have the ability to see above and below the water surface. Their unique eyes gives them the ability to watch out for predators from above and to search for foods like mosquitoes as well as search for food in the water.

Appearance: Long and slender fish. Females are bigger than males.

Tank Region: Swims in the top.

They are usually found where rivers starts so they used to brackish water. So make sure to mix in 2 teaspoons of marine salt per 1 L of water to create a brackish aquarium tank.

Given that the Four-Eyed Fish spent majority of it’s time at the surface level of the water. It’s better to house it in a long aquarium tank rather than one that is tall. The only time it goes to the middle or below the tank is when it needs to eat.

Four-Eyed Fish are a schooling fish so you should get at least four.

The Four-Eyed Fish are Livebearers so they give birth to live fry instead of laying eggs.

The Four-Eyed Fish is difficult to breed in captivity because of their large-size and the fry will have trouble finding hiding spots from the hungry parents and other tank mates. When their fry are born, they are about 1.5 inches (3.8 cm). Like all Livebearer fish, they’ll eat their own fry if they spot them.